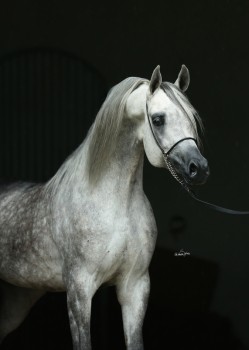 Pomian is the youngest in Polish breeding son of Gazal Al Shaqab, leased during 2002-2003 by the studs of Janów Podlaski and Michałów and used later by means of frozen semen. Gazal Al Shaqab is a representative of the valuable Saklavi I line. His dam, Kajora, is a mare of almostentirely Polish roots, descending from the line of Wołoszka. The get of Gazal stand out with their beauty and Arabian type.

In Polish breeding Gazal Al Shaqab left a magnificent group of get, starting off with the phenomenal Janów-bred Pianissima, double Polish National Champion, double All Nations Cup Champion, European and World, as well as US National Junior Champion, Al Khalediah and Dubai Champion and the first ever World Platinum Champion Mare. Notable sons among Gazal's get include: Drabant, Equifor, El Azem, Eol, Pegasus, Ebert and Eryks, as well as Białka's Hun and Michałów's Georgetown.

Pomian descends from the most valuable damline in Janów, that of Szamrajówka. His dam, Pilar, daughter of Pipi, granddaughter of the unforgettable Pilarka, left a plethora of excellent daughters at the stud, such as : Panonia, Pieta, Pinga, Pinta, Pilarosa, Piba.

Pomian is a young stallion with a correct, harmonious build, excellent top line, long shoulder, strong legs, beautiful neck, very good movement, presenting the best traits of his family. He was very successful at shows as a yearling and two year old. As a three year old he underwent racing training. Next year he debuted as a senior at shows, placing third in the Nationals behid the later gold and silver champions, Equator and Pogrom.