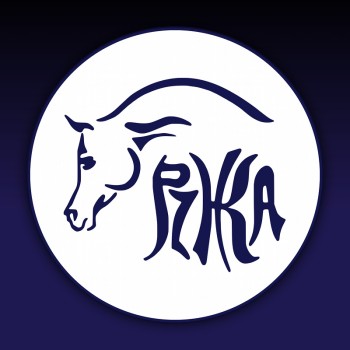 Peon is a son of Penta and a grandson of Pętla, both representing the famous Janów Podlaski "P" line of Piewica. An interesting racing-pedigree of Pętla, daughter of Visbaden, is reflected in the stamina of her produce. Prado, Poligon and Pentagram have been successful at the track and Pentagram was one of the best horses of his crop. Pętla has definitely proven herself as a producer. Her sons are of a strong build, steel health and additionally beautiful. One of them, Pogrom, is a first ever Triple Crowned champion from the US (Scottsdale, Las Vegas & US Nationals), as well as a champion from the Junior Spring Show in Białka/Best in Show, Polish National Champion as both a junior and senior..

Penta is the daughter of the wonderful Ecaho, sold to the US in 2003. Ecaho turned out to be the best son of Pepton, one of the best representatives of the Ibrahim d.d. sire line used in Poland. Characteristic for this line is the grey coat color, excellent Arabian type, a long neck, large eye and evident masculinity. Ecaho passes beauty and type onto his get, the best examples of which are Emanda, Esturia, Olita, Palmeta and Alhambra.

Peon is a stallion with outstanding movement, a beautiful head and expressive eye. He completed a two year racing training program at Janów, after which he began endurance training. Later he took up breeding duties.