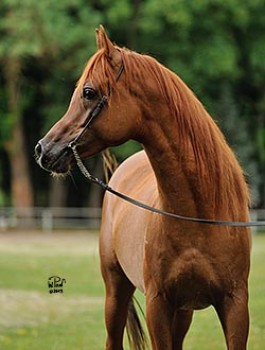 Paladid is the only son in Polish breeding of the stallion Al Adeed Al Shaqab – representative of the valued Saklavi I sire line – grandson of the famous Ansata Ibn Halima.

Al Adeed is not only full of beauty, but also has a good and gentle nature. He passes on his phenotypic traits to his get: dryness and the type preferred at shows. In Janów Podlaski Al Adeed Al Shaqab gave the splendid Pilarosa, Polish National Senior Bronze Champion Mare, twice Polish National Top Five Mare, twice European Senior Top Five Mare and an InterCup Bronze Champion Mare from Prague.

Paladid's dam, the late Pianosa, is a representative of Janów Podlaski's most valuable dam line of Szamrajówka, which has produced the most champions for the stud. Pianosa is a daughter of Eukaliptus and granddaughter of Pilarka.

Paladid lost his dam several days after birth. As a foal he suffered an injury upon returning from teh pastures. The injury completely excluded him from shows, that's why he is not know to a wider group of breeders. He is a robust horse, dry, with a short and dished head, small, nicely carved ears and pretty eye.

Paladid began his breeding career in 2015.