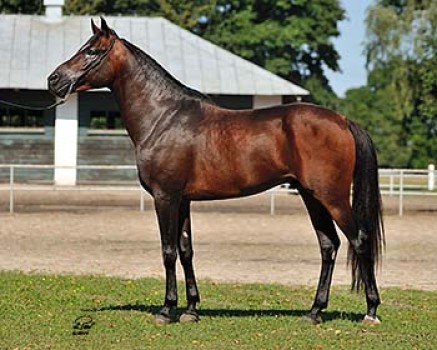 Kuheilaan Aafas Maidaan was gifted in 2014 to Janów Podlaski Stud by the King of Bahrain. The horse is a representative of the same dam line of Kuhailan Afas, out of which descended the bay colt imported in 1931 by Bogdan Ziętarski from Bahrain to the stud of Prince Roman Sanguszko in Gumniska. Arabic countries do not specify sire lines and the stallions are classified according to their dam line. The Prince's acquisition received the name of Kuhailan Afas. He began a valuable sire line in Poland, whose famous representatives include Comet, Probat and Fawor.

The stallion has a deep, strong, short and well coupled body and a slanting, long shoulder. His phenotype resembles the desert horses, such as were imported almost 100 years ago from the Arabian Peninsula. The stallion is of good nature, balaned, gentle, easy to handle and eager to work under saddle. This is probably the result of strict selection over many centuries in the Arabian Peninsula, where preferred were horses invincible in battle and travel, brave, full of stamina and devoted to man.

He began his breeding career in 2015. Kuheilaan gained the interest of private breeders, who used him already in 2015.The first foals were born in January of 2016. As predicted, they present a different phenotype than horses in the stud and are strong an healthy.