PAHBA exists for 22 years and currently comprises 111 ordinary members. In total, there are about 250 Arabian horse breeders in the Polish Arabian Stud Book.

1. PAHBA is the only Arabian Horse Breeders Association in Poland comprising both private breeders and the Polish state studs.

2. There are around 1100 Arabian stud mares in Poland. Around 850 are owned by private breeders and 250 by the state studs. A ratio that has not changed in the last 15 years. Every year, around 500 Arabian foals are born in Poland, the majority of them in private studs.

4. The Annual General Meeting, held on 2 and 3 March 2019 in Janów Podlaski, elected the new Executive Committee and approved new members. As in previous years, 43 members were present.

PAHBA gathers persons strictly connected to both Arabian horse breeding and the promotion of such horses in Poland and abroad, acting for the good of the breed and its development.

5. PAHBA is an apolitical organisation and does not intend to interfere in any political affairs as well as in private matters or the "Polish-Polish war".

The Executive Board calls for common sense and stopping the smear campaign against the Association.

Recently, a lot of unreliable information appeared in the media, which was not verified at source but based on biased reports provided by people not necessarly benevolent to the Association. The Executive Board appreciates the concern shown for the Polish Arabian horse breeding condition, however it calls into question the sincerity of the intentions and the communication means.

PAHBA is an autonomous organisation and does not intend to conduct a futile discussion on the Polish Arabian horse breeding condition with persons outside the Association who do not represent the breeders community.

PAHBA conducts a transparent information policy and encourages every interested person, either in or outside the breeders community, to follow the official statements and information provided by the PAHBA Executive Board. 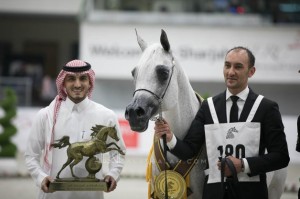 Another gold for PEPITA

Another show was ruled by PEPITA (Ekstern - Pepesza/Eukaliptus) – after her stunning performance in the class (93,20, 9x20), Janów’s mare claimed the gold medal in Senior Mares Championship at the prestigious Dubai International Arabian Horse Show. 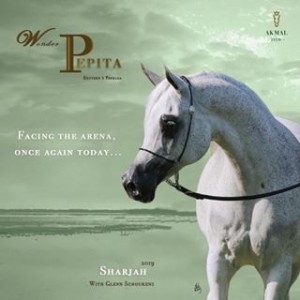 5 out of 12 contestants of the Mares Championship at the Sharjah International Arabian Horse Show (UAE) were Polish-bred.

A summary of the activities that took place in 2018 was presented to the 23rd General Meeting.

The PAHBA members expressed their high apprecistion for the work of the outgoing Executive Board.

Aside from short-term activities, PAHBA was involved in the new Statutory process and the publication of a 20th Anniversary brochure. The income of  PAHBA has nearly doubled. All profits were allocated to PAHBA statuatory activities.
The Executive Board for the next term (2019-2023) was elected. The new Board is comprised of Mr. Krzysztof Poszepczyński (re-elected as President), Mr. Longin Błachut (re-elected as Vice President), Mr. Marek Błaszkiewicz (re-elected for a second term) and two new members, Mr. Hubert Kulesza and Mr. Łukasz Goździalski.
Dr. Witold Piotrowski remains the Chairman of the Audit Committee. The other members elected are, Mrs. Monika Szpura and Mr. Marek Tul.
The composition of the Peer Tribunal has changed completely. The new Chairman is Mr. Andrzej Szalkowski, and the new members are Mrs. Danuta Jaskółka-Grylewicz and Mr. Paweł Lis.
During the seminar a lecture was given on "Purebred Arabian Horses in Poland: breeding history, type of usage and market today", originally presented during the 2nd International Horse Industry Summit in Hangzou, China. The second presentation, entitled "How to take a good photograph of the Arabian Horse", has been postponed.
>>> link 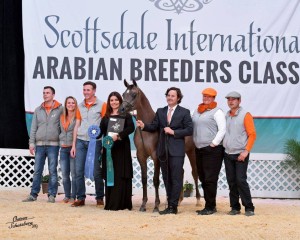 At his very first show, MOMAYZ ALJASSIMYA (out of RP Miss Surprise, in the picture) was crowned Gold Champion Yearling Colt, after easily winning his class.

MONA LISA ALJASSIMYA (out of Minwah) was placed second in the yearling fillies’ class, and later in the Championship’s Top 5.

Congratulations to the breeder Al Jassimya Farm on the wonderful results of EQUATOR’s lease.

Polish mares were on the spotlight of International Abu Dhabi Championship (February 8th-12th). Białka's CAMILIA turned out to be the winner of section D of Mares 4+ class, while Michałów's PUSTYNNA FIESTA was 5th. In section Michałów's PROSARIA was 3rd. Congratulations!
>>> link

Gold for SEFORA, silver for WASA in Qatar 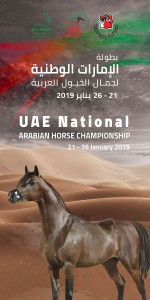 The presence of Polish stallions was noticeable as well. In the main Senior Stallions’ Championship we had EL FADO (WH Justice – Enya, bred by ZPH „Strusinianka”, while in the local championship – ZWIEWNY (Maran – Znaczna) bred by Andrzej Piwowarski and LARANDO (QR Marc – Laranda) bred by Michałów Stud.

The Championships were represented very strongly. The number of entries to every section of every class was many times above 20. This is all the more reason for being proud of the Polish-breds’ numerous successes.

The first Title show in 2019 is already behind us. 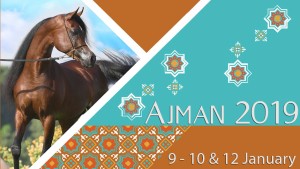 Congratulations to all the breeders and owners.