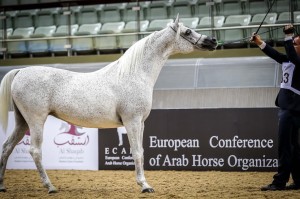 During 21st Qatar National Arabian Horse Show, taking place on 7th to 9th of December in Doha, Polish-bred WASA was a number one star. 12 years old daughter of WH Justice out of Waresa has been bred by Krzysztof Goździalski - Falborek Arabians. Not only was she awarded the Champion Mare title, but also was chosen as The Best in Show! Congratulations to all the connections!

Our only contender, Białka’s PARILLUS (Ascot DD – Parilla/Enzo), has again met the bad luck, losing the Top 5 only by the type score

It was a good night for Team EQUATOR  (QR Marc – Ekliptyka/Ekstern). After convincing class win and the highest score of the show (93,67) he qualified to the championship as an audience’s favorite, followed by fellow ATIUS O (Shahim Al Nakeeb – Atia Oone/Johann El Jamaal) owned by Mr Czesław Gołaszewski, who claimed marvelous 2nd place in Section A, ultimately finishing the championships in the World Top 5.

In spite of his class winning, EQUATOR wasn’t exactly a sure bet for the champion title. Fortunately, his splendid final performance convinced 5 out of 7 judges, which led him to the World Senior Champion Stallion title.

European Championships (B-cat.), which took place on 27th and 28th of October in Lier, Belgium, turned to be very successful for Polish horses. The final balance of the show is one silver and three gold medals. Predominnace of Polish Senior Mares is especially worth underlining.

As usual, there was no numerous Polish representation amongst the youngest fillies. Michałów State Stud showed half-sister to EQUATOR, the chestnut EL BELISSIMA (Ascot DD – Ekliptyka/Ekstern), while Janów – BENONA (Ascot DD – Bernadetta/Ganges). Both fillies finished their performances at the class level.

Michałów’s EMANOLLA (Vitorio TO – Emandoria/Gazal Al Shaqab) was the best amongst three-year-olds. Our second representative, WIEŻA CZARÓW  (Vitorio TO – Wieża Marzeń/Ekstern), bred by Michałów State Stud and owned by Marek Rzepka, also finished in the Top 5.

Class order was repeated during the championship and the result turned out quite dreamy for Polish breeding. WILDONA returns home as a new European Champion, while PUSTYNIA KAHILA – as a new European Reserve Champion.

In the 8-10 year olds class, under the absence of AJA ANGELO there was no competition for Michałów’s  EQUATOR (QR Marc – Ekliptyka/Ekstern), who claimed 5x20 for type and 5x20 for movement, winning the class with 1,80 points advantage (93,80 – the highest score of the show!). Bred by Janów Podlaski State Stud ETORYK (Om El Shahmaan – Etnologia/Gazal Al Shaqab) claimed the third place.

It turned out that EQUATOR easily surpassed the competition in the championship as well, as he was unanimously chosen The European Senior Champion Stallion.

The full results of the competition are available here: bit.ly/2PSiIbK

In the history of Polish Arabian Horse Racing October the 7th 2018 will forever be one of the most memorable dates. That day, during the famous L’Arc meeting at the Longchamps, FAZZA AL KHALEDIAH (Jalnar Al Khalidiah – Assma Al Khalediah/Amer) delivered an unexpected G1 triumph for his Polish trainer and owners, winning easily in Qatar Arabian World Cup  (G1, 2000 m, 1 000 000).

Last season in Poland belonged to Fazza. After losing his maiden tag in the first entry, he continued his winning streak, claiming Białka, Sambor and Porównawcza Stakes (A-cat.) as well as Europejczyk Stakes (B-cat.). His 3-year-old record turned to be a perfect 6:6-0-0.

He opened the next season with easy wins in Comet and Ofir Stakes (A-cat.). After that, Michał Borkowski made his first international try in Milan President of the UAE (Listed, 2000 m, 50 600 €). Fazza won the race, (9th time in a row), but it wasn’t the easy journey – Pierantonio Covertino used the whip 22 times. Soon after that, Fazza was entered to the Qatar Arabian World Cup.

A month and a half ater that came the first failure. In Europa Prize (G3 PA, 2600 m, 148 750 PLN) Fazza had to step out the winners’ circle for French-bred IJRAM (Amer – Massamarie/Tidjani), losing by a whole 2 ½ lengths. After the race the decision of running in the world’s toughest race was questioned by many. None the less Polska AKF team and Michał Borkowski boldly took the risk and went to Paris.

Fazza’s odds before the race oscilated around whopping 1:69, second highest (after the leader). Compare it to QAWC 2017 winner GAZWAN, with odds no more than 1:4,7!

He broke from the gate quite unwell and for a majority of time kept his position behind. The first kilometer was ran in dazzling 1:06’61. Polish commentator at Służewiec Racetrack began to doubt any chances of Fazza’s abilities to take this pace. He couldn’t be more wrong. In the final stretch Pierantonio Covertino found the perfect gap between horses and Fazza just jumped out of the stake, winning clearly by 2 ½ lengths.

Time of the race, 2:13’33, despite being quite slow for the QAWC, still beats Służewiec record by 2,67 seconds!

No Polish horse in a century can compete with this achievement. Modest colt from relatively unknown Poland beating 15 world’s greatest Arabian racehorses astonished everyone and thriller his homeland. Hearing Polish National Anthem at Longchamp was one of a kind moment. 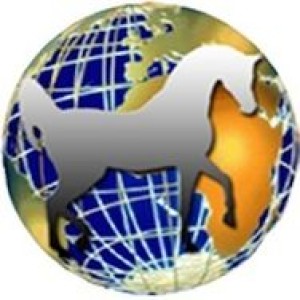 In Title show All Nations Cup, ran between 27th and 30th of September in Aachen, Polish horses, as usual, didn't disappoint their audience. In spite of finishing with just three medals (2 silver and 1 bronze), their showings can be described as success. Especially the absolute predominance of Polish senior mares is worth emphasizing. Below you can find the results of Polish representatives.

Among mares 11 years and older there was no competition for ETNOLOGIA bred by Janow Podlaski State Stud and owned by Halsdon Arabians – Mrs Shirley Watts, who won the class with huge odds of 0,81 points. Michałów's PALANGA (Ekstern – Panika) took 3rd place.

Both of Polish contenders – Janów’s ERANTIS (Ascot DD – Eugara) and EMAR AVI (Empire – El Medissa), bred and owned by Krzysztof Gołaszewski  – after finishing 4th in their classes were qualified for the championship. 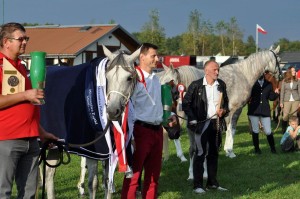 This year, thanks to Mrs. Sonia Lindsay (sister of Patricia) and our Association, Oaks was also the memorial of two great personalities of Arabian horse world, who sadly passed three years ago.

IZABELLA PAWELEC ZAWADZKA, First Lady of Polish Breeding, was a co-funder and first president of our association. There is nothing wrong in saying that without Mrs. Iza Polish Arabian Horse wouldn’t become our national pride. She was the one who organized the first Janów Podlaski auction, Polish Nationals or Polish Junior Show. She was also an international judge and active WAHO and ECAHO member. Every breeder perceived her as a genuine authority, and everyone who had the luck to meet her – as a warm exceptional woman.

PATRCIA LINDSAY of Great Britain made Polish arabians recognisable internationally, importing mares from Polish state studs since 1958 and assisting in negotiations with American breeders. Thanks to her, USA got, among others, the true legend NABOR (Negatiw – Lagodna/Posejdon). Her stud, Holmes Farm in Northamptonshire, has been home for the finest Polish lines for 60 years. She learned Polish language out of love for Polish horses and never abandoned the idea of „Pure Polish”.

We are glad to inform you that we will be hosting Izabella Pawelec-Zawadzka and Patricia Lindsay memorial on Służewiec Racetrack again next year. We truly hope that this event will become permanent position in the racing calendar. 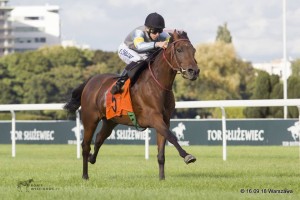 In Sunday’s Gazella, Mlecha and Sahara Prize – Oaks (A-cat., 38 500 PLN, 2400) there was no one to compete with market’s favourite SWEET DREAM (Murhib – Soleil Kossack/Marwan I) with Szczepan Mazur in the saddle. Led in the distance by stablemate SUPER STAR (Marwan I – Soadassin Kossack/Nougatin), she came down the home stretch in hand, experiencing no pressure from rivals and winning ultimately by 12 lenghts.

SWEET DREAM is owned by Tomasz Ruciński and trained by Małgorzata Łojek. She, as well as SEKRETARKA and SUPER STAR who has been placed sixth, was bred by Magdalena and Daniel Gromala from Czorty Stud – huge congratulations.

In the second weekend of September two prize races for purebreds took place on Służewiec Racetrack.