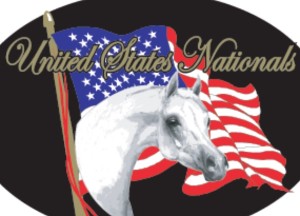 This year's US Nationals, taking place in Tulsa, OK, gave plenty of joy to Polish breeding.

The Białka-bred PERFIRKA (Gazal Al Shaqab - Perforacja/Ernal) won the title of Senior Champion Mare in the AAOTH category. The mare was presented by Lara Ames of Cedar Ridge Farm, who purchased Perfirka at the 2014 Pride of Poland Sale for 220 thousand euro. Perfirka won with a large advantage over her rivals, receiving 387 pts (second place had 380, third - 379, fourth - 377,5 and fifth - 376).

Whereas in the most important breeding category EQUATOR (QR Marc - Ekliptyka/Ekstern) claimed the Senior Stallion Breeding Reserve Championship. This Michałów-bred stallion is currently leased by Aljassimya Farms from Qatar. A day earlier Equator won his class (6-8 year old stallions) with 401,5 pts, including 3x20 for type and 4x20 for movement. He left his rivals far behind, as the second place holder received just 388 pts, the third and fourth - 387 and the fifth - 378. In the finals Equator had to yield to MARAJJ (Marwan Al Shaqab - RGA Kouress/Kouvay Bey), who won his class of 9 year old and above stallions with a score lower than Equator's - 395 pts.